Give Me All of It 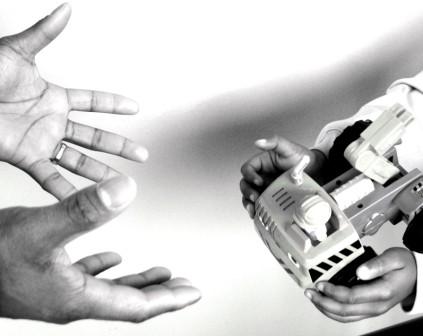 Billy had a toy truck with a big bed in the back that could hold a glorious noise of pebbles, sticks, and marbles. The shiny yellow front and blue sides and the big grooved tires were scratched and dulled with play and love, and wherever Billy went, the truck went. He took it to church, he took it to his cousins’ house; he tried to take it to preschool; he took it to bed.

One day, when Billy was pretending that his truck was flying, it crashed, hard, on the brick wall outside the house. The top piece that fit over the body, overturned, rested dead beside the set of back wheels; and the body of the truck lay silent by the flower bed.

His father came outside, found the scatter of plastic beside a little wailing boy.

At first, Billy took out only the top piece and placed it into his father’s hand. “I need all of it,” Dad said. “Give me all of it.”

Slowly, one piece at a time, Billy handed the broken pieces to his father.

Billy shadowed his father into the house, into the kitchen, watched him open a drawer and take out a crinkly white tube. He saw his dad bend over, with the tube, run something along the edges, until most of the pieces sat upright, bonded, on the counter. A set of wheels still lay to the side. Dad said, “Don’t touch it, Billy,” and rumpled his hair.

Later, when the noon sun spilled in through the window, Billy saw the shine catch the plastic of the truck like a spotlight in a showroom. “He forgot about my truck,” gulped Billy. There lay the rod holding the two wheels. Billy picked up the lone wheels and rolled them along the floor. It wasn’t much, but at least it was something.

“Billy. Give it to me.” Guilty, Billy stumbled backward.

That night, dinner over and the truck sitting quiet under the kitchen light, Billy looked at it and thought, “He doesn’t want me to have fun.” So Billy climbed up and held his dear toy, turning it round and round as his father had done. He, Billy, could fix it. He, Billy, would be faster.  He grabbed the rod and wheels. He lay the truck on its back, belly up to the light, and pushed, Hit, Hit, so the wheels would go in, Hit, Hit—

And the rest of the truck went flying to the floor. Crack!

The stern face of his father robbed the voice from Billy’s throat.

“You broke it more, Billy. I told you not to touch it. I’m sorry, but no more truck. You disobeyed.”

For two days the little boy haunted all the places his truck had graced—the path to the creek in back, the playroom, the place on the ground where it had crashed, the kitchen counter where it had sat like a dead thing. His truck, gone. His truck, totaled, taken from him by his father forever. Daddy took his truck because he didn’t like him, thought Billy. Daddy kept him from playing with his broken truck because having fun was bad.

Billy gave up following his father around. He gave up hope for the scratched-up truck and committed himself to silent days with his cars and Leggos and the shallow scrape of tiny Hotwheels.

“Billy. Wake up,” his father said the third morning. Billy rubbed his eyes. There, in his father’s hands, sat his truck.

“I had to glue it, Billy,” his dad said. “The glue needed time to dry. You broke it more because you dropped it.”

Billy blinked. He was too little to know anything about glue, and drying time, and broken tabs, and wheels and axles.

Billy did understand that. He nodded, and the truck was lowered into his happy arms. But that was nothing compared to the loving grin on his daddy’s face.

Billy is silly, and so are we. In our growth journey, we see the things we love fall from our hands, sometimes through carelessness, sometimes through no fault of our own. We pick up the ruins, and our Father says, “Give it to Me.” We give Him a small part because we can’t bear to let go, and He says, “Give Me all of it.” And we wait. Thinking He forgot, we snatch back pieces of what we once had, little mirages that dull the fear. Thinking He wants only second-best, we try to jam the pieces back together. And when they crack, we wonder if He loves us, and all our loves.

Then we let go.

In the morning, He comes, and all is new. How did He do it? We don’t know. We’re too little to understand.

But life holds an important task for us, as for Billy. He says, “Trust Me,” and that is the key to all the power and joy and strength we can hold. And nothing compares to His loving smile, and the promise that He’ll be there the next time we fear, and fall. “Give Me all of it,” He coaxes, and no matter how hard it is to hand over that worry, that dream, that loss, that injustice, it’s so much better when we do. For our ragged scraps only have hope when they’re in His hands.

This entry was posted on February 15, 2012 by greentreecenter. It was filed under Blog Posts and was tagged with broken, Daddy, Father, give, hands, Love, son, truck, trust, worry.

Where to Find Us

Convenient to downtown, GreenTree
is located in the West Salem
Community, just blocks away from
Old Salem, UNCSA, and the new
Gateway YWCA.