At GreenTree’s first community gathering in our new building, there was a ditch several feet deep beside the piano, a hard concrete floor, and a drafty front door that blew in shivery air every time somebody opened it.

It was our Thanksgiving meal, on a November night in 2008. There was no bold and stylish “GreenTree” lettering on the face of the building. There were no bright daffodils and purple pansies fringing the front in color, no fireplace nestled in the corner, no café tables. No, on that first community meal, there were gray walls smudged with old shop dirt, and a few brown termite tracks climbing halfway up the cinder-block like little vines.

We’d bought the building earlier that fall; and now, on a chilly Sunday night, clusters of us treaded through the grass with steaming casseroles or pies toward the old Yates Aluminum building, like merry Pilgrims about to place a milestone. When we walked in, the entrance was an office section littered with scraps of paper, piles of screws, and drill bits. Replacement windows leaned in piles against the walls; siding samples in different colors shadowed the place; and the big shop-room, where all the tables, food, and chairs waited, was a gray, cool, basement-like place with muddy old pads of insulation at one end and cinder-block on the other sides.

You could say that we were at the end of something—the end of the geographical journey. We felt like the children of Israel, having wandered to an unfamiliar realm; and here we were, talking and laughing and marching up to the door of our haven. We were at the beginning of something too: our relocation and re-naming, the fresh, clean slate of a new era, the era of GreenTree.

When you’re at the end of something and the beginning of something else, you could say that you’re really in the middle. And life has many middles in it.

It’s like a story. Our English teachers always told us that a story was supposed to have a beginning, a middle, and an end. The middle usually involves the war, the problem, the waiting, that uncertainty that gives any good narrative depth and drama. When we’re reading a good tale, we enjoy that dark, murky middle. When we’re living our own story, it’s not so much fun.

Why not? The difference amounts to a simple but powerful little word.

Hope is when we’re settled in our soft seats at the movie theater, with a fizzy Pepsi and some buttery popcorn. Hope watches the characters on screen, in their dangerous middle. They’re worried; they’re sad, they’re climbing Mount Doom. But not us, the viewers. We know it’s just a middle. We don’t know what’s going to happen exactly, but we know it’s all going to resolve somehow. And with a buttery crunch and a sparkly sip, we whisper in the dark (with a tiny smile), “Wonder how it’s going to turn out?”

Wouldn’t it be nice if we could treat real life like this? Step outside of it all, look at the losses and betrayals and aggravation and bad news and pain and cock our heads quizzically and ask (with a tiny smile), “Wonder how it’s going to turn out?”

The apostle Paul tells us that we can. That we absolutely can.

Hope says, “Bring the popcorn and the Coke, and sit awhile. This is only the middle.”

Those of us on that chilly night, in the old Yates Aluminum building we’d bought, could drape the tables with snow-white covers and place on them hot, steamy food surrounded by the iron-cool shop-room air, and be merry about it, because we had hope. In fact, the whole unfinished face of the big dingy room, the echo and the dull grime against the bright chatter of old and new friends, made the whole thing seem only like anticipation. 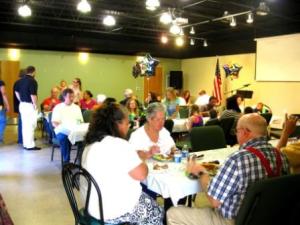 The GreenTree building did get renovated, into an inviting place with huggy warm-green walls, cozy corners, crisp lights and smooth edges. And we’re in some kind of middle again. GreenTree is; I am; you are; there is always a middle somewhere. Dare we ask, with a timid trust in the Writer of our stories, “I wonder how it’s going to turn out? I wonder what He’s about to teach me? I wonder what surprising magic will sail in by the very waters of this sinister thing that is flooding our world?

If we dare ask, the Wisdom of the Ages may teach GreenTree, and you, and me, to settle for a bit, make lemonade out of the proverbial lemons, get out our paper and pens, write down the lessons, watch the story. Watch and pray.

And I wonder how it will turn out.

Always, always for good, He whispers, with a grin. The most complete, wonderful, delicious meaning of the word good. That’s the Story Maker Whose name is also Love.

“Now hope does not disappoint, because the love of God has been poured out in our hearts by the Holy Spirit who was given to us.” (Romans 5:5 NKJ)

This entry was posted on March 7, 2012 by greentreecenter. It was filed under Blog Posts and was tagged with beginning, building, climb, end, GreenTree, hope, middle, movie, popcorn, Romans, story, Thanksgiving, tribulation.

Where to Find Us

Convenient to downtown, GreenTree
is located in the West Salem
Community, just blocks away from
Old Salem, UNCSA, and the new
Gateway YWCA.